Path of Exile Items in Ambush and Invasion Leagues

Sacrifice of the Vaal introduces two new Challenge Leagues for Path of Exile. Players can collect Path of Exile items from the all-new Ambush and Invasion Leagues. 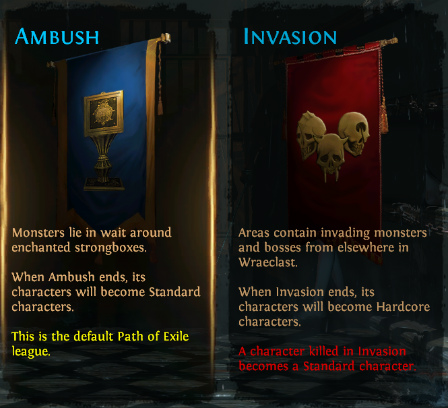 Getting Path of Exile items from Strongboxes

One of the new Challenge Leagues is Ambush. In this game mode, players will encounter Strongboxes which are a special version of the regular chests. Their main difference from the garden variety is that they have a chance to come in Magic, Rare, or Unique Rarity. Like Path of Exile items, they will also have modifiers. Opening a Strongbox will cause players to be ambushed (hence the League name) by monsters. The mobs need to be dispatched before the contents of the box can be claimed. The rare the Strongbox, the stronger the monsters and the better the Path of Exile items within.

For those who prefer hardcore leagues, then Invasion is for you. Players are challenged to survive groups of monsters invading from different levels and acts. To ramp up the difficulty, the invading monsters will be lead by a Unique boss monster of the same type. As with any hardcore league, dying in Invasion will get your character and his/her Path of Exile items transferred to Standard.