Travelling back to your hunting ground after you die in Path of Exile can be time consuming. Recent Patch 1.1.2 however introduces the Checkpoint system to alleviate this. Now, players can get back to hunting for their POE Items sooner and get a chance to get the new Vaal Skill Gem. 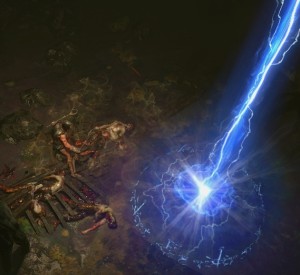 Entering a new area of using internal teleporters in one will now cause the game to generate a Checkpoint. Upon death, players will then be able to choose to respawn at their last Checkpoint or in town. Hunting POE Items in dangerous will still be risky, but at least now, going back won’t take forever.

A new addition to the list POE Items available in Patch 1.1.2 is the corrupted Skill Gem: Vaal Storm Call. The new skill will allow players to place a marked that will summon a bolt of lightning. Before the bolt hits, the marker will also strike nearby monsters with lightning. Quite useful when you’re clearing out dense monster groups.