Here is another ascendancy class of Ranger in Path of Exile that is pretty unique, the Pathfinder. When you hear Pathfinder, it is pretty vague and rarely used as a class name. Here we take a look what makes a Pathfinder so unique and strong, legitimately sought out by players of Path of Exile.

Here is a brief overview of what a Pathfinder is according to the Path of Exile gamepedia:

The Pathfinder’s focal point is her flasks, which she can improve to grant additional offensive or defensive bonuses. The Pathfinder is a flexible class; her tree allows using both spells and attacks effectively, and any damage type (elemental, physical or chaos).

This is pretty cool because by using flasks, you gain more buffs then MORE buffs because you are a Pathfinder, making the Ascendancy Class really powerful offensively and defensively. 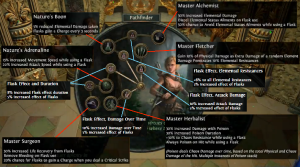 This is from POE gamepedia as well:

The Pathfinder is somehow like an Alchemist (generally) that heavily relies on potions which are flasks and benefits more because of the passive skills the class has. Pathfinder will make you think of what flasks to use and at the same how to maximize the passive abilities while flasks are active.

So try out Pathfinder in Path of Exile now to test it out!