Shadows of the Realm: Forms in the Dark and POE Items

A knife from the dark; by the time you’ve seen him, it’s already too late. The Shadow kills silently in hunting for POE Items, without hesitation, without mercy. He is versed in many weapons, but prefers ambush and subterfuge. Hundreds have met their deaths shrieking in his traps. 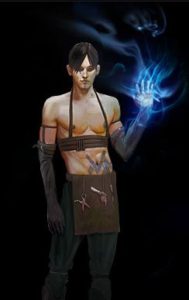 The Shadow has come from the Guild of the Night in Oriath for one purpose: to inflict pain and suffering on anyone who’s wronged him. Exile is merely an inconvenience.

The Shadow worked the dark hours in Oriath, making a living and a name for himself as a ruthless killer-for-hire. Arrogant and self-assured, he prided himself on his ability to take out his targets by surprise, before vanishing without a trace.

Although he always demanded a high price for his services, he didnât care for wealth. That was a vice of the helpless, sweaty nobles who clamored to hire him to deliver contrived justices. He didnât care for their petty feuds. He craved the challenge, danger, and thrill of crafting elaborate assassinations and executing them perfectly. His substantial fees were only to weed out the impulsive fools seeking to protect their expensive reputations.

His reputation, on the other hand, was earned the hard way, and promised strict confidentiality alongside a guarantee of a completed job. However, his patent disdain for others, as well as his sardonic and insolent attitude won him a free trip to Wraeclast, after a particularly paranoid client decided he couldnât be trusted enough to keep his mouth shut. A strangely sweet aftertaste and a swiftly darkening vision of the floorboards are the last memories the Shadow has of his former home in Oriath.

Stranded in Wraeclast, he must bring all his formidable skills to bear in order to survive. Here on the cursed shores of this wasteland roiling with undeath and other unnatural monstrosities, he will find the mortal challenge he so craved.

The Shadow employs deadly traps and spells against his opponents, finishing off survivors with quick dagger strikes while darting in and out of combat. Getting him the items he need for POE Trading is an essential to get more power.

His signature tactic is to lay hidden Traps and to lure his opponents in. When they step too close, the Trap springs and his foes find themselves caught in place, missing a leg or blown to pieces in a fiery explosion. Alternatively, he can place Remote Mines – manually detonated devices. These do not trigger on proximity, but only when he activates the detonator. Using these, he can set off explosive Traps in the middle of clusters of enemies, catching them all in the blast.